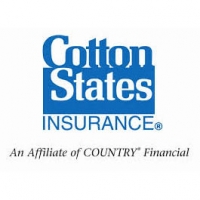 Cotton States Insurance was an auto, home and life insurance company that offered its insurance products in the Southeastern United States through its two main insurance brokerages. Cotton States was merged with Country Financial at the end of 2012 following a carefully planned 7 year transition period. At the moment Country Financial has all but phased out the Cotton States brand and only offers insurance under its own brand. Former Cotton States customers are still served by Country agents and support professionals, and these customers now can benefit from the large number of coverage options and discounts that Country has to offer. The merger did not change any of the policies that are still held by former Cotton States customers.

Cotton States Insurance was founded in 1941 as Farmers Mutual Insurance Association and the name was later changed to Cotton States. In 2005, Country Financial purchased Cotton States, but Cotton States continued to operate somewhat independently from 2005 to 2012.

From 2005 to 2013, Country slowly began transitioning Cotton States branded insurance agencies and products over to the Country brand. Country did this in order to simplify its insurance offerings with just one brand and due to the fact that the merger would be finalized at the end of 2012.

In 2013 A.M. Best awarded Country with a financial strength rating of A+ (Superior) and a credit rating of “aa-“ and it withdrew its ratings for Cotton States due to the fact that Cotton States was officially merged with Country.

The website for Cotton States was taken down and redirected a landing page on Country’s website with a brief explanation on why Cotton States Insurance was being renamed to Country, as well as a detailed FAQ. Country Financial’s website is one of the most high tech and advanced websites out of any insurance company with extensive and detailed information about its many different coverage options. One slight downside is that the website may have a few too many features which makes the browsing experience a bit cluttered, but the fast navigation and well-designed theme makes up for a lot of that.

Now that Cotton States is a part of Country Financial the types of insurance that are offered are many. For auto insurance in particular the following is offered:

In addition to auto insurance, Country offers many other types of insurance such as home and renters, commercial, life, health, long term care, disability, Medicare supplement, and more. Country is unique in that it also sells investments like mutual funds and has financial planners who can advise its insurance holders on investment options

There are a few negative Cotton States reviews online but they are pretty much irrelevant because Cotton State policy holders are now served by Country support representatives and agents. When it comes to reviews of Country Financial insurance online there are a mix of positive reviews and complaints. Some of the complaints of Country Financial auto insurance described unexpected rate hikes, unexpected policy cancellation and difficulties with the claims service.

The positive reviews of Country auto insurance described helpful customer support, satisfaction with the multiple policy discounts and packages that they offer, and fast claims processing. For what it’s worth, Country was given 3 out of 5 power circles for overall customer satisfaction by J.D. Power for the North Central U.S. Auto Insurance Study, suggesting that their customer support is at least average. Country reports a 95.7% overall claims satisfaction rating on their website. 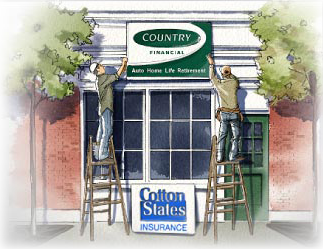 Those who are looking for auto insurance in one of Country’s 17 state markets should get a quote from Country and other providers. Now that Country has merged with Cotton States it has become a major competitor in the auto insurance industry, and in the future it may continue to increase its market share by offering auto coverage in others states. Other insurance providers may offer more affordable rates than Country so the best thing to do is to compare offers from multiple companies and see which ones offer the highest level of auto coverage at the lowest rate. You can compare auto insurance offers now just by entering your zip code on this page.