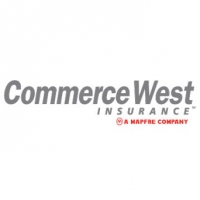 Commerce West is a division of the Commerce Group, which is wholly owned by MAPFRE, S.A., a global insurance provider and one of the largest insurance companies in the world. Commerce Group was rated an A+ by A.M. Best in its most recently financial stability outlook reports due to the company’s overall financial stability and progress. Commerce Group was only given 3 out of 5 power circles by J.D. Power for the New England region, however Commerce West in particular was not rated in the California J.D. Power regional study.

Discounts offered to customers in the states of California, Arizona and Oregon include:

To get more information about discounts, customers would need to call a Commerce West agent.

The minimum levels of liability coverage are offered to drivers in the states of California, Arizona and Oregon, along with supplementary coverage options. Liability limits for both states go up to $500,000 and optional coverage options include vacation liability, personal items, motor home, and emergency vehicle expense coverage.

The Commerce website is hosted by MAPFRE and has many of the most useful features that can be expected on an insurance company website. Unfortunately the Commerce website lacks specific information about the discounts and products available to residents of California, Arizona and Oregon, but it does have more detailed information for residents of other Commerce states. With the companies being combined recently it is most likely that the same discounts and auto coverage options are offered for Commerce West customers.

Third party reviews of Commerce Group in New England were average in the most recent survey, but Commerce West in particular was not rated so it is difficult to determine how the customer service is for that branch of Commerce Group.

Commerce West may be worth a look for customers in California, Arizona and Oregon, however there are many alternative choices to consider that may offer better discounts and a larger range of coverage options. To find some of these providers you can enter your zip code on this page and you will receive live quotes based on the coverage that you need.